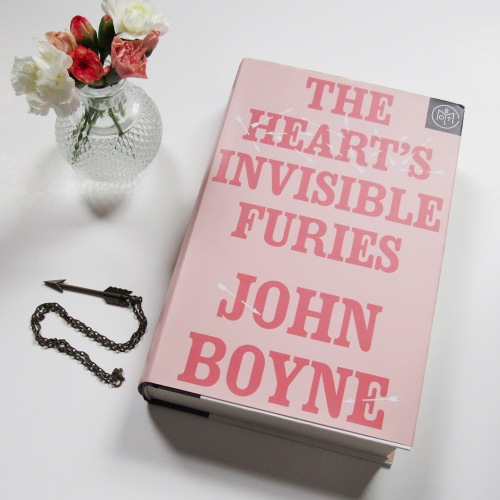 The Heart’s Invisible Furies follows the span of the life of Cyril Avery, beginning with his mother giving birth to him illegitimately, and sections that skip every seven years thereafter. Cyril is a loveable character who struggles with his identify and the strict ideals of living in 1950’s Ireland. This coming of age tale has a cast of well developed characters and comes full circle many times over.

While this book has been getting rave reviews, my opinions are unfortunately mixed.  I have things I loved about this book and other things that I downright hated. Let me start with the good: Cyril’s character is loveable from the start.  He is simple, humble and intelligent. The writing in this book is just beautiful.  Such an easy storytelling style. I really enjoyed reading about Ireland and how oppressed the strong Catholic beliefs in Ireland made life very difficult for many people.  Something else that I really loved about this book was its ability to come full circle, again and again.  So much of what happened very early in the book comes back to Cyril in his later adult years. I think that gives a book a strong purpose when events are connected. The character’s in this book are very well developed, which is something I always love.

Now for the bad.  First of all, I don’t think that the description of this book was accurate.  Or at least, it left out some major points. The book description mentions Cyril’s struggle to find his identity.  However, his struggle is actually finding his sexuality. The entire book, in my opinion, was focused on Cyril being gay and his struggle to come to terms with it. There were so many conversations about sex throughout the entire book between men, women, elderly, and children.  After about 300 pages, I was beginning to wonder if there would ever be a conversation NOT about sex in the book.  Cyril’s friend Julian is a sexual deviant and described many of his escapades with women. For not mentioning the word ‘sex’ once in the description (on the jacket), this book was about 80% focused on sex. I’m not a prude, but after a while, it just became off putting. Another negative for me was the length, I just didn’t feel it needed to be that long. If a large chunk of the sex talk was taken out, I would probably have loved this book.

As it is, I think I will rate The Heart’s Invisible Furies 3.5/5 stars.