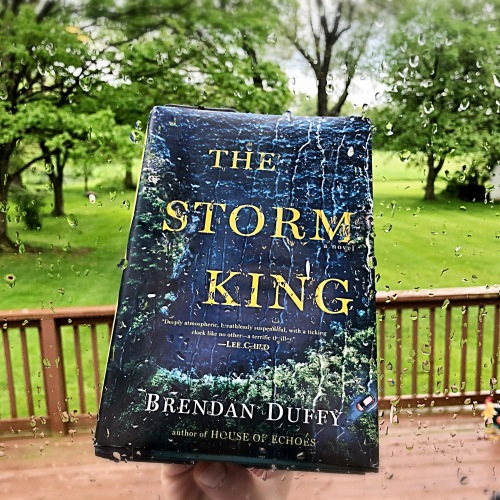 I really enjoyed The Storm King, it’s an extremely atmospheric thriller which I am a sucker for!

Burying the past only gives it strength–and fury.

Nate McHale has assembled the kind of life most people would envy. After a tumultuous youth marked by his inexplicable survival of a devastating tragedy, Nate left his Adirondack hometown of Greystone Lake and never looked back. Fourteen years later, he’s become a respected New York City surgeon, devoted husband, and loving father.

Then a body is discovered deep in the forests that surround Greystone Lake.

This disturbing news finally draws Nate home. While navigating a tense landscape of secrets and suspicion, resentments and guilt, Nate reconnects with estranged friends and old enemies, and encounters strangers who seem to know impossible things about him. Haunting every moment is the Lake’s sinister history and the memory of wild, beautiful Lucy Bennett, with whom Nate is forever linked by shattering loss and youthful passion.

As a massive hurricane bears down on the Northeast, the air becomes electric, the clouds grow dark, and escalating acts of violence echo events from Nate’s own past. Without a doubt, a reckoning is coming–one that will lay bare the lies that lifelong friends have told themselves and unleash a vengeance that may consume them all.

Like I said, I can almost guarantee that I will fall in love with a book that has a very atmospheric setting and The Storm King delivered just that. Set in a small town on the water, Greystone Lake, it didn’t have the same vibe as other books set in a small town where all the townies know everyone’s business.  In The Storm King, the town had an almost exclusive feel to it like the people were privileged to live there, and I was left wishing I could visit the magical little town.  Duffy included so much of the town into this novel that it almost became a character of itself.

The only critique I have is with the characters.  Even though a decent amount of the book was vesting in developing the characters, I was still wanting a little more.  I didn’t feel like I could relate to them and got them confused in my head for the duration of the novel.

But overall, I felt very submerged in this book and enjoyed it.  With more focus on building up the backstory and the motives for the character’s actions, this would be a good thriller for most people, even those who don’t read much of the genre.  I rate this one 4 out of 5 stars.

One thought on “The Storm King by Brandan Duffy”