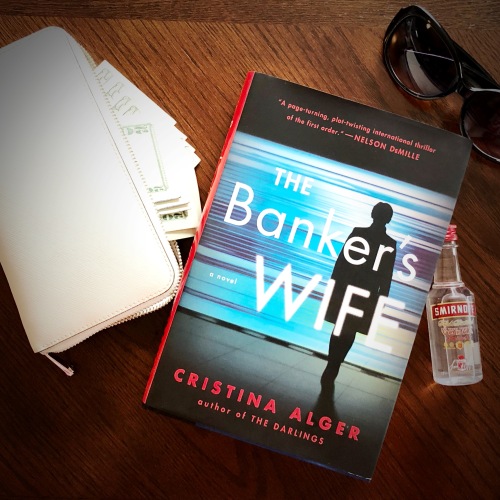 Thank you to Putnam publishers and GetRed Publicity for sending me a free copy of The Banker’s Wife in exchange for my honest review.  All opinions are my own.

On an early morning in November, a couple boards a private plane bound for Geneva, flying into a storm. Soon after, it simply drops off the radar, and its wreckage is later uncovered in the Alps. Among the disappeared is Matthew Lerner, a banking insider at Swiss United, a powerful offshore bank. His young widow, Annabel, is left grappling with the secrets he left behind, including an encrypted laptop and a shady client list. As she begins a desperate search for answers, she determines that Matthew’s death was no accident, and that she is now in the crosshairs of his powerful enemies.

Meanwhile, ambitious society journalist Marina Tourneau has finally landed at the top. Now that she’s engaged to Grant Ellis, she will stop writing about powerful families and finally be a part of one. Her entry into the upper echelons of New York’s social scene is more appealing than any article could ever be, but, after the death of her mentor, she agrees to dig into one more story. While looking into Swiss United, Marina uncovers information that implicates some of the most powerful men in the financial world, including some who are too close to home. The story could also be the answer to Annabel’s heartbreaking search–if Marina chooses to publish it.

The Banker’s Wife is both a high-stakes thriller and an inside look at the personal lives in the intriguing world of finance, introducing Cristina Alger as a powerful new voice in the genre.

I really enjoyed this sleek and sophisticated thriller.  A whip-smart ride through the high-stakes banking world, The Banker’s Wife had me completely immersed in the jet-set lifestyle and wondering what it would be like to live the high life, even just for a day. I was guessing until the end, and the outcome was perfection.

Alger also did a fantastic job of building up each character and spacing them out through the first portion of the book.  I really appreciate this in a novel: when all the characters are introduced in the first chapter or two I get confused but in The Banker’s Wife that wasn’t the case.  I was able to easily keep track of everyone despite the fact that the novel had a lot of characters.

The pacing in this novel is perfect: a page turning, fast read.  Devoid of gore or violence, this thriller is the prefect summer read for just about anyone. Very well done writing, I will be keeping an eye out for Alger in the future!  I rate this one 4 out of 5 stars.