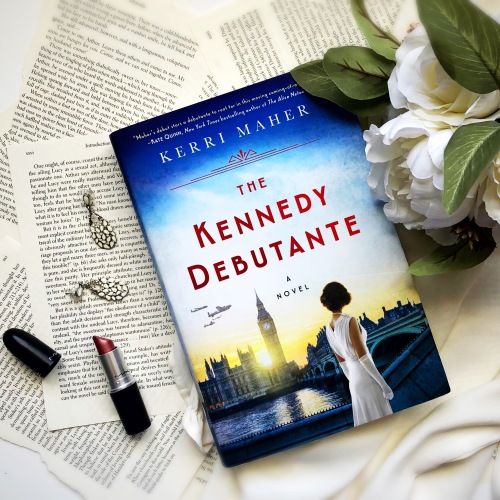 Thank you to Berkley for sending me a free copy of The Kennedy Debutante in exchange for an honest review.  All opinions are my own.

Synopsis from the Publisher:

London, 1938. The effervescent “It girl” of London society since her father was named the ambassador, Kathleen “Kick” Kennedy moves in rarified circles, rubbing satin-covered elbows with some of the 20th century’s most powerful figures. Eager to escape the watchful eye of her strict mother, Rose, the antics of her older brothers, Jack and Joe, and the erratic behavior of her sister Rosemary, Kick is ready to strike out on her own and is soon swept off her feet by Billy Hartington, the future Duke of Devonshire.

But their love is forbidden, as Kick’s devout Catholic family and Billy’s staunchly Protestant one would never approve their match. When war breaks like a tidal wave across her world, Billy is ripped from her arms as the Kennedys are forced to return to the States. Kick gets work as a journalist and joins the Red Cross to get back to England, where she will have to decide where her true loyalties lie—with family or with love.

The Kennedy Debutante is a perfect blend of history, faith, culture, love and life. Maher did a superb job writing Kick as the young, naïve girl she was. Kick is full of hope for the future mixed with the desire to please her family yet not lose sight of what is most important in her heart. I enjoyed getting to know more about the Kennedy family through a much un-talked about member.

A very well paced novel, The Kennedy Debutant takes the reader through the Kennedy family’s time in Europe, before the war and during. I was constantly shaking my head at their strong need to keep up appearances. Even though I know it was a different time, I still had a hard time reading through the difficulties Kick faced all because she had to make her family look good.  He hearts desires had to take a back seat to appearances.

The only part of this book that I didn’t love was the focus on Kick’s relationship with Billy Harrington.  I felt like a large chunk of the second half was going in circles about the adversity they were facing, being of different religions. However, the love/relationship part of any book is my least favorite part. It’s just not for me.  If you don’t mind love stories or enjoy them then it shouldn’t bother you at all.

I went into this book a little in the dark about the Kennedy family. I knew they were a big political family but that was about it.  Now I know so much more about not just Kick, but the rest of the family as well.  Yay to learning from books!  If you are interested in the Kennedy family or you just like historical fiction in general, this book should be on your TBR. I rate it 4/5 stars.